Paydays are sacred in the workplace. Some employees who can’t remember how many years they’ve been married or how long it’s been since their last physical exam can tell you exactly how many days until the next paycheck arrives. Depending on their financial situations, other staff members may barely keep their bills paid between checks.

So when employers change the regular payday, there is bound to be some backlash from employees. In addition, federal and state labor officials take a dim view of businesses attempting to use paychecks to enforce discipline or manipulate the workweek to reduce payroll. 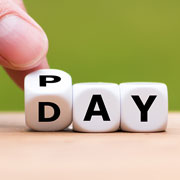 Here’s one example of a practice that could lead to a legal battle.

Let’s say an employer has trouble with Friday absenteeism — especially when Thursday is payday. So the employer tries to coerce employees into work by changing payday to Friday for some people — depending on if they come to work.

Even if Friday absenteeism is a frustrating problem, making payday a different day only for certain people is not the way to deal with it. Once you designate a payday, it’s generally best to adhere to the policy as much as possible.

The Fair Labor Standards Act (FLSA) does not prohibit employers from changing paydays. But the law states that wages must be paid when due, which generally means the next regularly scheduled payday. Beyond this provision, the FLSA does not place requirements on how frequently wages are paid.

A Second Circuit Court of Appeals case helped clarify the legality of changing a regularly scheduled payday. The employer in the case decided to change the regular payday for administrative reasons, and sought to ease the burden of by phasing it in over five weeks. When the employees sued, the court looked to the FLSA to determine if there was a violation of the law. Here’s what the court found: The FLSA requires that employees be paid promptly, but otherwise does not specify exactly when. Employers are not prevented from changing the beginning or ending dates of a pay period if the change:

In addition to federal law, if your company is considering changing its designated schedule, check the requirements of your state by clicking here. Most states have their own regulations regarding the timing of payroll and may also have other requirements, such as posting the schedule in a common area.

reprinted with permission from Thomson Reuters Feb 2021. This article is intended to be information in purpose and scope and should not be considered legal guidance.