Advocates for cannabis legalization in New York pushed for a law that would include expungement of marijuana convictions. The Marijuana Regulation and Taxation Act, enacted on March 31, creates an automatic expungement system for a wide range of offenses. (Getty/Erik McGregor)

New York’s Marijuana Regulation and Taxation Act, signed into law on March 31, is the most progressive cannabis legislation in the country and has profound ambitions.

Besides legalizing adult personal use of cannabis and drastically downgrading penalties for illegal use, the MRTA aims to create and regulate a new cannabis market on principles of social justice. Its goal is to channel tax revenue into communities of color, which were most affected by decades of marijuana enforcement, and give them opportunities to create thriving businesses.

“We incorporated a lot of things that other states have been doing and really pushed for a progressive holistic bill that really addressed not just the need for legalization, but the need for helping communities that have been impacted by decades of overpolicing. I think this bill does that in a way that other states haven’t accomplished,” said Emma Goodman, a staff attorney at The Legal Aid Society of NYC who has been involved in the drafting of the law.

“Some people have actually called it a reparations bill,” she said. “In some ways, it is.”

Key to its objectives, the law establishes an automatic process to expunge hundreds of thousands of cannabis-related convictions, the vast majority of them of people of color, for both past and current offenses.

Technical hurdles lay ahead. Clearing the records, some of them decades old, will take time and a painstaking effort. Still, legal experts say the law is an important step forward in reversing the enduring effects of the war on drugs in New York, and provides a national blueprint for legalization of marijuana in other states and possibly at the federal level.

Melissa Moore, the New York state director of the Drug Policy Alliance, a think tank that has been heavily involved in the legalization campaign across the country from lobbying lawmakers to drafting laws, said the MRTA has served as a national reference point on marijuana expungement even before it passed.

“The MRTA, in the way that it handles and creates automatic expungement, sets a really important benchmark for the country,” Moore said. “Even before it passed, advocates working on comprehensive marijuana reform in other states were already looking to MRTA for guidance around how they could craft expungement also.”

Decriminalization and Expungement in the MRTA
Like all other convictions, those for marijuana possession or sale create significant barriers to employment, education, housing and other aspects of life in a society where background checks have become ubiquitous.
Landlords have wide discretion in considering convictions, including those for low-level marijuana offenses, when considering applicants for a rental. People with convictions are limited in their employment prospects, particularly with licensed occupations where background checks are required. That is why expungement was a top priority for lawmakers drafting the MRTA bill.
“Without expungement, those convictions will come up for the rest of your life,” said Alison Wilkey, a former public defender and director of the Institute for Justice and Opportunity at John Jay College of Criminal Justice. “The expungement provisions are a really important way of trying to erase some of the harm from mass criminalization.”
The MRTA — ironically pronounced “mur-dah” by some — eliminated Article 221 of New York Penal Law and replaced it with Article 222, with redefined and lower penalties. Adult personal use was legalized up to 3 ounces, or 85 grams, of the plant and 0.8 ounces, or 24 grams, of concentrated cannabis.

The law also downgraded some offenses, and some behaviors that were criminal under the old statute are now either legal or considered low-level violations.
For instance, fifth-degree criminal possession of marijuana, formerly a misdemeanor, has been lowered to a violation.

In a broad sense, MRTA allows for the expungement of past convictions for possessing up to 16 ounces of marijuana or for selling up to 25 grams. The law also expunges convictions for possession of less than 1 ounce of concentrated cannabis.
The type of ongoing offenses that will be expungeable under the MRTA include smoking in a restricted area such as a school zone, exceeding limits for homegrown cannabis, and violations for unlawful possession and sale.

The key feature of the MRTA expungement process is that it’s automatic. People with convictions don’t have to file paperwork to have their records removed as in the past. “The fact that these MRTA provisions are automatic is really important,” Wilkey said. “It provides relief to people without them having to take extra steps.”
Studies on expungement laws in other states has shown that petition-based processes fail to benefit the people they are intended for. New York’s own experience with application-based expungement bears that out.

In 2017, the state passed its state record-clearing law, Criminal Procedure Law 160.59, which allows people to apply for the expungement of certain convictions. Only about 0.5% of the estimated 600,000 eligible people have so far successfully cleared their records under the law. Advocates blame the application process itself and a lack of outreach for the disappointing results. “My idea at the time was that I would be extremely busy,” said Goodman, who worked on the 2017 expungement bill. “What I learned very quickly is that an application-based system just doesn’t provide access to the people who need it most.”

Goodman later joined Start Smart, a group of attorneys and advocates working together on a cannabis legalization plan rooted in social justice principles. Her task was to fashion an automatic expungement provision to add to the MRTA. “That’s how we ended up with automatic expungement being passed first in 2019 and then expanded this year,” she said. Goodman’s work has been used to craft another, much more comprehensive expungement bill that is gaining ground in Albany as part of the Clean Slate campaign.

A Blueprint for the Nation
Meanwhile, legalization and expungement are gaining ground in other states. On Thursday, Connecticut passed a bill that would make it the 19th state to legalize marijuana. The bill, which Gov. Ned Lamont said he would sign, legalizes adult cannabis and allows some expungement, though not as broadly as in New York and other states.

S.B. 1201 legalized adult possession of up to 1.5 ounces of marijuana beginning on July 1. Illegal possession of up to 5 ounces would be punished with a $100 on the first offense and $250 for subsequent offenses.
Under the law, people with criminal records for possession of less than 4 ounces of cannabis incurred between Jan 1, 2000, and Oct. 1, 2015, will have their convictions automatically expunged. Records for more serious offenses and those for offenses moving forward will be expungeable by filing a petition, with no cost to the petitioner.
A broader expungement bill enacted in the state on June 10 and separate from the cannabis reform will clear a larger number of convictions, including those for marijuana offenses. 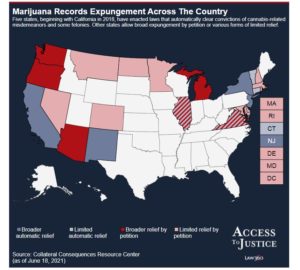 While legalization is taking different shapes across the country, the MRTA is informing how the expungement of marijuana offenses is being codified in several states, Moore said.
This year, New Jersey and New Mexico adopted broad versions of automatic expungement similar to New York’s law, though they don’t go as far.
New Jersey’s comprehensive bill, which was enacted in February, allows records for possession of any quantity of marijuana to be automatically expunged.

New Mexico’s legislation, passed during a special legislative session and set to go into effect on June 29, clears records of convictions for behaviors that would have been legal or lesser offenses under the new law. Some offenses of distribution of marijuana that were felonies under the old law are now misdemeanors, and are expungeable. “It was crafted very much looking at the provisions in the MRTA,” Moore said of the expungement bill.

She said the MRTA also served as a reference point for Virginia’s S.B. 1406, enacted on April 7, which legalizes adult possession of up to 1 ounce of marijuana starting on July 1. Possession of up to 1 pound of marijuana will be considered a violation, punishable with a $25 fine.
The law allows for the automatic erasure of past misdemeanor offenses for possession, sale, gift, distribution or possession with intent to sell, give, or distribute marijuana. It also allows certain past marijuana felonies to be expunged through an application process, if a court finds that maintaining the record would be a “manifest injustice” to the petitioner.

At the federal level, legislators are also looking at New York’s cannabis law as they work on two bills that aim at making marijuana legal across the country.

The Marijuana Opportunity Reinvestment and Expungement Act, or MORE Act, first introduced in the House of Representatives by Rep. Jerrold Nadler in 2019, would legalize marijuana nationally, erase past convictions and use tax revenue from marijuana sales to invest in communities that bore the brunt of the war on drugs. It would also provide funding to state governments to implement expungement at the state level.
The House approved the bill last year, but it stalled in the Senate. It was reintroduced this year, with more provisions involving social equity.
On the Senate side, a bill first introduced in 2019 by then-Sen. Kamala Harris, D-California, would have broader effects. Since Harris became vice president, a handful of top Senate Democrats have taken up work on the bill, the details of which haven’t been disclosed yet.

Maritza Perez, who leads the Drug Police Alliance’s policy in Washington, D.C., said the federal legislation and the MRTA have followed parallel paths, in constant feedback with each other. In her view, the work on the federal legislation has paved the way for the MRTA. “We’ve been working on the MORE Act for years now,” Perez said. “A lot of the things that are in our bill were also in the New York bill. I think they just kind of played off each other.” Moore agreed. “It’s really been an iterative process,” she said. “The MRTA helped inform the work at the federal level, and we know Senator Schumer is looking closely at the MRTA provisions as he and Senators Booker and Wyden work on drafting the Senate bill to end cannabis prohibition.”

How the MRTA Came To Be
When the legislature passed two bills in 2019 downgrading penalties for cannabis possession and sale, they also created the first ever automatic expungement process in the state.
The legislation allowed for the automatic expungement of records for the two lowest marijuana offenses in the state: unlawful possession, a violation, and fifth-degree criminal possession, a class B misdemeanor that included smoking marijuana in public or possessing more than 25 grams.
Racial justice was the main driver for those bills, justice reform advocates say. But even after prosecutors around the state began to drop marijuana charges, and arrests overall dropped sharply, the racial disparity in the arrests that took place remained steep.