When your company’s staff is culturally diverse, it may be tempting to require all employees to speak only English during work hours. After all, it might seem easier to promote unity and teamwork when everyone speaks the same language.
But is it legal? This is a confusing area, but one that is becoming increasingly important because the number of complaints being filed with the Equal Employment Opportunity Commission (EEOC) and state agencies is on the rise.

Background: There is no federal law that specifically prohibits employers from adopting an English-only policy. But the EEOC has a history of suing companies with such policies by invoking Title VII of the Civil Rights Act of 1964, which prohibits employment discrimination based on national origin.

The EEOC requires compelling business reasons for English-only rules and arbitrary policies can lead to discrimination charges – especially if a company tries to enforce the rules during breaks or other off-duty time. 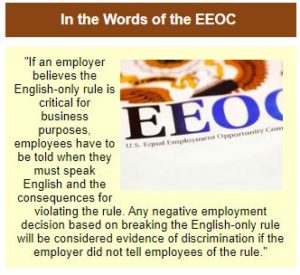 There have been a number of cases that help illustrate how employers should handle this issue. Here are three:

Three Italian restaurants located in New York state created a hostile work environment for Hispanic employees because of their national origin, demanding that they only speak English, and firing one employee in retaliation for his complaint, the EEOC charged in a lawsuit filed in 2015.

According to the lawsuit, the restaurants’ co-owner on an almost daily basis subjected Hispanic workers to slurs because of their national origin. Additionally, the co-owner demanded that Hispanic employees speak only English in the workplace, and to illustrate his point, he took out a dollar bill from his wallet, held it, and told the Hispanic workers, “This is America, you must speak English.” The lawsuit also claimed that Hispanic workers were treated less favorably regarding leave and sick days.

EEOC Trial Attorney Jadhira Rivera added, “Since the harasser was an owner, the workers felt that they had no recourse but to endure the ill-treatment. We want to insure that all workers know they do not have to be subjected to slurs based on their national origin in order to keep their jobs.”

A cosmetics retailer insisted that its sales clerks had to speak English whenever customers were in its stores. The only time the employees were allowed to speak in foreign languages was when there were no customers present or when the clerks were on break or at lunch.

On the other hand, employees were permitted — in fact, encouraged — to speak to customers in languages other than English if the customers preferred to do so.

The EEOC filed a lawsuit against the retailer alleging that the policy was, in effect, discriminatory. But the district court in New York tossed out the case in 2005. It noted that speaking in non-English languages when customers are present has a negative impact on helpfulness, accessibility and approachability. Therefore, such a policy is justified for business reasons.

A Wisconsin metal and plastic products manufacturer violated federal law by firing a group of Hmong and Hispanic employees because of their national origin, the EEOC charged in a lawsuit filed in 2014.

The EEOC stated its investigation revealed that the company fired the Hmong and Hispanic employees based on 10-minute observations that marked them down for their English skills, even though those skills weren’t needed to perform their jobs. All of those fired had received satisfactory ratings on their annual performance evaluations while working for the company.

EEOC Chicago Regional Attorney John C. Hendrickson stated:  “When speaking English fluently is not, in fact, required for the safe and effective performance of a job, nor for the successful operation of the employer’s business, requiring employees to be fluent in English usually constitutes employment discrimination on the basis of national origin — and thus violates federal law.”

If your company is interested in having an English-only policy on its premises, proceed with caution. Before instituting language rules, consult with your human resources advisor and employment law attorney. Be aware that businesses that deal with the general public have more leeway to impose restraints. Some examples of rare instances when a company might be able to institute an English-only policy are when:

Generally, reasons such as “more harmony” or “better company image” won’t pass muster with federal regulators. To determine whether your English-only requirement is justified, ask these questions:

1. Is English language proficiency an essential function of the job?
2. Do customers require English-only contact?
3. Will the rule place an undue burden on employees whose first language is not English? Will it cause safety problems?
4. Is the English-only policy limited in scope? In other words, can employees speak in other languages on breaks and when it doesn’t interfere with customer service?

There is a great deal of debate over the use of language in the U.S. But if you want to avoid the trouble and expense of litigation, seek professional advice before instituting an English-only policy.